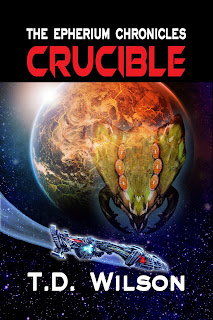 Crucible has been released!  Currently, it is available on Amazon and Smashwords.  Smashwords has approved it for their premium catalog.  I will update everyone with the retailer links as they come available.

Here are the links:

Crucible is already off to a strong showing.  Be sure to check out the first book of the series, Embrace, if you haven't already.

I plan to release excerpts from the third book, Echoes, here and on Facebook in the coming months.
Posted by T.D. Wilson at 6:39 AM 1 comment: 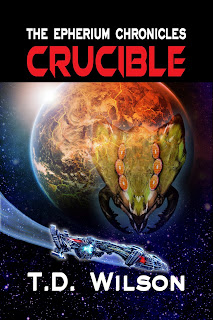 Just one week until the release of the second book of The Epherium Chronicles.  Crucible will be available on Amazon and Smashwords, just like Embrace.  I will keep everyone posted as the availability from other online retailers is known.  Keep your eyes peeled for the announcement here or on the Facebook page, www.facebook.com/TheEpheriumChronicles.
Posted by T.D. Wilson at 6:26 AM 2 comments: 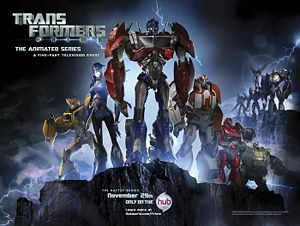 This animated series has begun it third and final season on the HUB network only a few weeks ago.  The developers have stated that the series will be changed or re-invented, but I do hope the storyline will continue.  This series has been ripe with great stories and new looks at Optimus and Megatron from their early beginnings.  The third season has an added tag: Beast Hunters.

At the end of the second season, the Decepticons had destroyed the Autobot base on Earth and Optimus' fate is once again uncertain.  The new season brings about a new Decepticon foe, the Predacon.  It is an engineered clone created by Shockwave whose purpose is to hunt down the surviving Autobots.  To me, it sort of looks like a cross between and dragon and one of the alien Predators from the movies.

I don't know about you, but the past weeks with my kids has put me on edge.  My boys have been theorizing every possibility related to Optimus Prime.  Is he dead?  Will he come back?  Who will take over?  It reminds me of the days when my family used to talk about Who Shot JR on Dallas.  Yes, I am that old...  After week 4 of the new season, we see that Optimus was about to enter the All Spark again and pass on the Matrix to a new leader, only to be remade into a new and more powerful form.

I am personally grateful that another death of Optimus was averted.  There have been so many deaths and subsequent rebirths of the character, but this series has managed to continue to hold my interest.  There is good writing, great animation, and the musical score is inspiring.  I wish more of the threads in past episodes could have been followed up, but I understand there are limitations.

There leaves only one thing in my mind when I think about the series since they added the Beast Wars tag.  Bring on the Dinobots!
Posted by T.D. Wilson at 11:08 AM 1 comment: 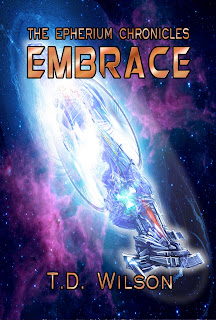 It is official!  The Epherium Chronicles:Embrace is now an Amazon Best-Seller!  At the time of this post it ranks 1,558 in total sales in the Kindle Store.  It is #5 in the top 100 Science Fiction Space Operas and #13 in Science Fiction Military.

Woot!  Now lets keep it there!  Crucible, the second book in the series, comes out April 26th!