In addition to the first trailer, the new poster for revealed for Star Wars: The Last Jedi.  I like it!. 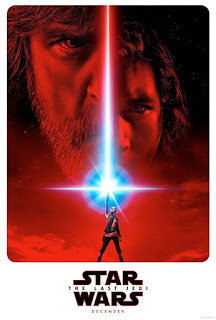 I have been a fan of The Transformers since the very first cartoon was released.  I watched the ragtag group of Autobots survive on Earth eventually reclaim Cybertron from Megatron and the Decepticons.  There have been multiple reboots of the story.  I personally think Transformers Prime was one of the best.  As far as the recent Michael Bay movies, I liked the first one.  The next two were ok.  The fourth movie, Age of Extinction was bad, just bad.  Good special effects, but the plot was awful.  Now here is The Last Knight.  The trailer shows more great special effects, but what gives me hope is the addition of Sir Anthony Hopkins.  He doesn't sign on to bad script movies.

Anyway, the bad guy appears to be Unicron.  It would be the most next logical step, but when Prime mentions his creator, I often wonder about the Quintessons, the mysterious creators of the Tranformers in the original cartoon series.  It could be and it would be interesting if Lockdown has been working for them.

Anyway, here is the next great trailer.

For many of us Star Wars fans, December cannot come fast enough.  The first full length trailer has hit the digital airwaves.  You get glimpses of both sides of the Force, Rey beginning her training as a Jedi and Kylo Ren looking forward to the demise of the Jedi.

The Thor: Ragnarok Trailer is here!

Thor: Ragnarok arrives this November, but the trailer has finally been release and it is sweet!  Asgard in ruins, Mjolnir destroyed, Hela looks responsible and Thor is now a gladiator slave.  Who is opponent in the ring?  None other than the Incredible Hulk.  Interesting story line pieces need to be revealed, but it looks like a real thrill ride.  Check out the trailer.