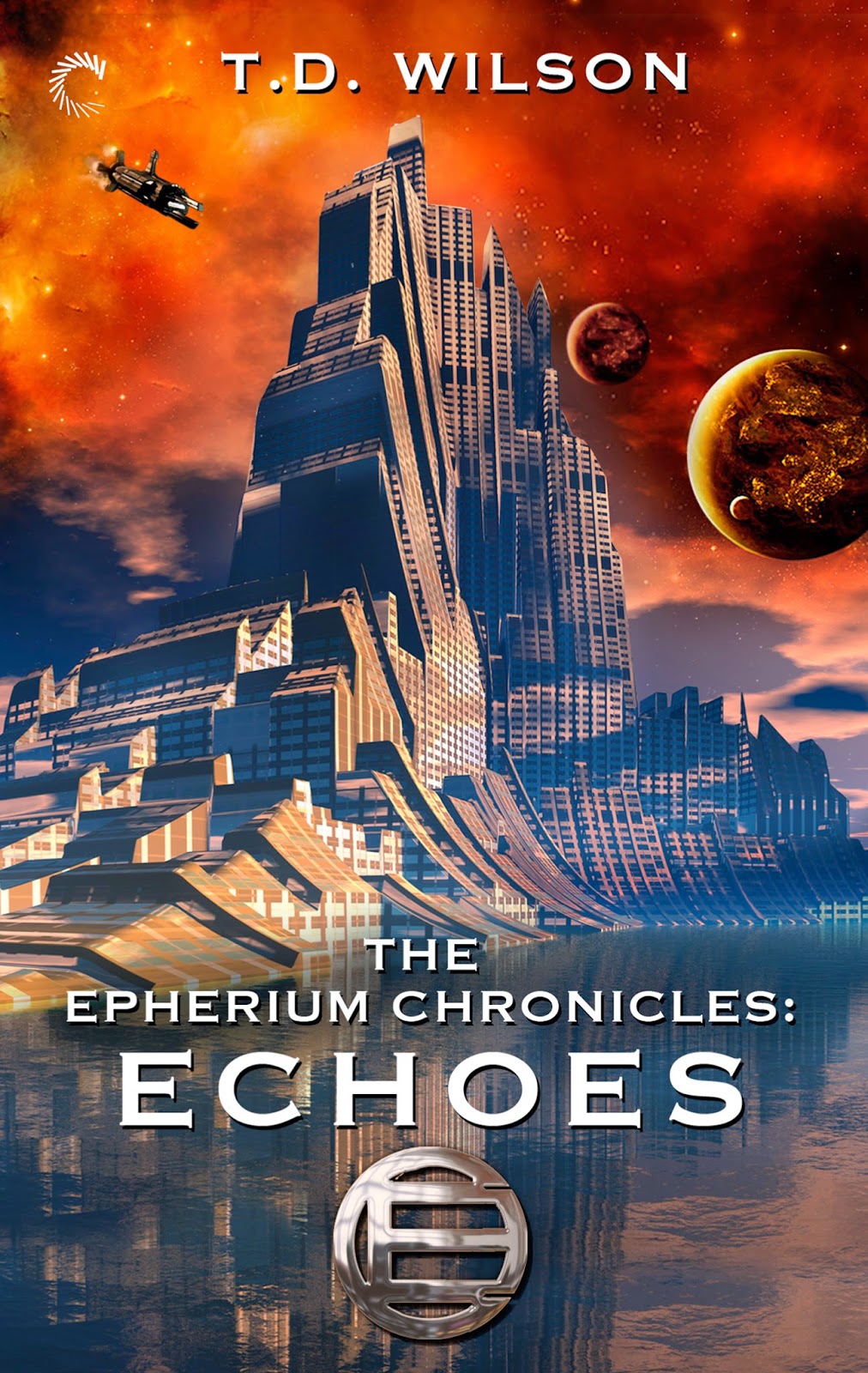 More reviews have been posted about Echoes from prominent book reviewers and they are glorious. Here's the latest from Amazon.

5.0 out of 5 stars A Winner! SciFi fans will love it! March 30, 2015
By Kathryn svendsen
Format:Kindle Edition
Mysteries and more mysteries. There are mysteries everywhere in The Epherium Chronicles: Echoes. Just as the war between the Cilik'ti seems to be resolved and Captain Hood is going to meet with them and their council, they mysteriously break away and then tell the colonists that there will be no council. And then again the humans are under attack by a Cilik'ti faction, though not the one that their friend Kree comes from.

Maya Greywalker's brother and his squadron of fighters arrive to assist the colony in their defences but somehow he ends up MIA and presumed dead. Given his enhanced genetic ability like Maya's, that in itself is strange. So is the way his squadron fights in formation. It's nothing like anyone aboard the Armstrong has ever seen.

There are so many twists and turns and so many things going on at the colony on Cygni as well as at Tau Ceti and in space above the planets you will have to pay attention to keep up. The book moves at a fast pace and will stretch your imagination.

Part fantasy, part science fiction, with a bit of a romance thrown in, The Epherium Chronicles: Echoes is the new Star Trek-type space saga. Strongly defined characters, well developed and personable, they are people we can relate to and care about. Echoes is the third book in the series and we have grown to know and love these characters over the past two books.

I enjoyed the creativity and the action in all the different locations where things were happening in the story. I do have to admit though that sometimes I got a bit lost between all the characters and where they were. There are a lot of characters in this book in several locations and if you're not careful, you can get lost.

I thought the wildlife on Tau Ceti was excellent. I hate spiders also, but I liked the spider in the cave with the rock-like egg.

I would recommend The Epherium Chronicles: Echoes to anyone who enjoys science fiction or fantasy books. This series is simply one of the best that I have read. I gave it 5 stars out of 5.

Thank you to the author for providing a copy of this book in exchange for a fair and honest review. A positive opinion was not required. All thoughts are my own.

This review was published on my blog Shelf Full of Books http://kathrynsshelffullofbooks.blogspot.com/2015/03/book-review-chronicles-of-epherium.html

5.0 out of 5 stars Intense battles, mystery, murder and mayhem April 1, 2015
By Catherine Mackay
Format:Kindle Edition|Verified Purchase
The author's writing is going from strength to strength with this next installment to the Epherium Chronicles which I couldn't put down. I can only say: WOW - there were so many twists and surprises I almost forgot to breathe and now I'm feeling sad cause I now have to wait for the next one - I hope T.D. Wilson can write fast because I need my Epherium fix, lol. Captain Hood and the Armstrong crew are off to check on the colony ship, Cabot which was making for the system of Tau Ceti. New enemies come to the fore in this installment - more bad guys creep out of the woodwork, new aliens called the Nelfarren appear and they are none to pleasant. There are some fantastically described battle scenes; the romance between Raf Sanchez and Maya Greywalker starts hotting up; terriorists on earth are causing endless headaches for the EDF; not all is as it should be with the colonists on Tau Ceti and some of them are inexplicably aging. All in all this book is a fantastic read - so if you like intense battle scenes, great characters, a little bit of mystery, murder and mayhem this is definitely the book for you.

In the third installment of the Epherium Chronicles, Captain James Hood has saved an Earth colony but now faces a host of new threats to the fledgling settlement. His alien Cilik'ti allies are in disarray and reinforcements from Earth come with strings.

I admit I’m a fan of military SF wherein fanciful weapons don’t show up out of the Void to save the day at the last minute. The protagonist of the story must use his wits to win and the characters have to deal with real personal, political and professional issues that would beset actual space warriors.

The action keeps the pages turning and the novel is salted with a good number of surprises to heighten the intrigue.

I recommend you acquire the first two books – Embrace and Crucible – to enhance your enjoyment of this one. And, there’s more to come.

Note: The Kindle Book Review received a free copy of this book for an independent, fair, and honest review. We are not associated with the author or Amazon.
Posted by T.D. Wilson at 8:10 PM