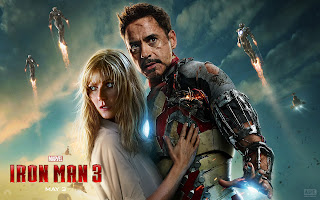 I forgot to post this one...  I took the family out to see the third Iron Man movie the weekend it came out.  a bit crowded, but not too bad for the time slot we chose.  My boys and I were really psych'd about this one.  The movie was action packed, full of good witty humor, and I wondered when AIM would show up in the Iron Man story.  This movie really is Tony Stark's final transformation from playboy to hero.  I liked the interaction with the kid in the movie and I think it kept him grounded.

Despite how much fun it was, I did have a few issues.  First of all, some of the one liners and comic jabs looked forced and felt as if they were only there to get a laugh, rather than be truly something Tony or one of the other characters would really say.

Two.  After all the other crap that Pepper Potts has been through, she is playing the damsel in distress?  Come on!  She should be flying her own suit by now.

The final issue I had was really my kids issue.  I loved Ben Kingsley, but my boys wanted the Mandarin.  THE MANDARIN!   And yes, SPOILER; the Mandarin is a fake setup by AIM that uses Ben Kingsley's character as a prop.  Maybe the real Mandarin will get offended and come back wanting an Iron Man 4.  LOL.