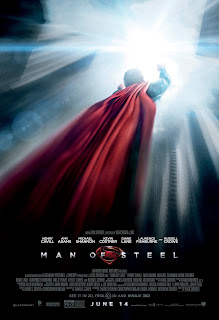 Characters..  Amy Adams did a good inquisitive Louis Lane.  I liked her in this and the red-hair was a nice change of pace too.  Now, I have heard all kinds of grief about Russell Crowe and Kevin Costner.  I don't know why.  "They didn't offer anything!" is a claim I heard a lot.  My two cents, here.  They are not the main character!!!!  However, they did provide us the unique boundaries of Clark/Kal's personality.  What they valued, what they believed in, and how much they loved their son.  What lengths should someone go or even sacrifice themselves to save others whom they have never known.  Jor-el and Jonathan Kent showed their son the value of life.  In doing so, it made it so much harder for Superman to take the Zod's life in the end of the film.  Zod gave him no other option.  That choice that Superman makes will undoubtedly haunt him to the end of his days.  All through the film we really begin to see the depths of Superman's humanity.

Now with Zod gone, Kal-el is truly the last of his race.  That is unless a new way can be made to reopen the phantom zone.  But if the Kryptonians there are freed, would they listen to Clark and try to find a new life for Krypton?  Or would they continue the course Zod had already put on?

There are a few nitpicks on dialogue and some confusing character interaction, but they didn't overly detract from my enjoyment of the story.  I did like the idea that all Kryptonians are essentially clones that are generated from the same codex.  It also makes sense that Jor-el, the rabble rouser (if there is such a thing on Krypton) that he is, would break with society and have a naturally conceived child.  I give it a 7.5 out of 10.  It was good, but not quite the wow.

I do think this film is a good starter that can make more inroads into other films for DC and ultimately to a Justice League movie.  Marvel has done a fantastic job integrating story lines for its characters involved in the Avengers and I would truly like to see DC step up and bring us something worthy of the World's Mightiest Heroes.
Posted by T.D. Wilson at 4:03 PM