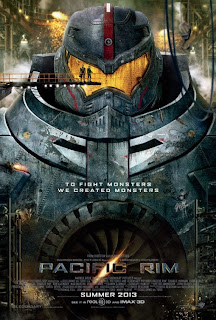 For most of my life as a kid, I was a huge fan of the big monster and giant robot movies.  Godzilla, Mothra, Gamera, King Kong, Ultraman, you name it.  You see them now and they look kind of cheesy, but back then, it was really cool stuff.

The Godzilla movie in 1998 with Matthew Broderick was just not the same.  I left that movie feeling a little deflated.  I wasn't sure if it was the story line around the monster or the monster itself.  It will be interesting to see what comes out of the new Godzilla movie to be released in 2014, but I digress.

In Pacific Rim, monsters have entered our world through a dimensional rift in the bottom of the Pacific Ocean.  The creatures continued to get stronger and slowly began to appear more frequently.  Soon, mankind's conventional weaponry can't handle them.  So, the Jaeger program began.

Let me stop there.  I am a big Rifts roleplaying fan, as well as Robotech and Battletech.  The idea of developing hundred plus ton robots or powered armor with human pilots is just freaking cool.

Now, the movie's plot is not deep and for a summer action movie like this, it doesn't have to be.  It was made for one reason; ENTERTAINMENT.  Trust me.  For an old monster/robot movie fan, this movie had that in spades.

I really liked the idea that the invaders were sending clones of the monsters or Kaiju through the rift.  It was really interesting to learn the clones were mentally linked.  They helped future monstrosities learn and adapt to the human tactics. The Kaiju were intelligent and they were sent through with a purpose. I thought the idea that the would be invaders were colonists and had tried to come over before using the dinosaurs was also a fun idea.  I give the writer kudos for the back story.

Now for the Jaegers.  Wow.  I liked the Drift.  In my own writings, I have employed the uses of neural interfaces with machines.  I could easily understand the impediment on the human mind if a solo pilot tried to control one of those huge mechs.  For me, I would love to be one of those who sign up just to try.  I have a twin brother is who is a six degree black belt in Okinawan Karate.  Hmm.. Drift compatible for kicking butt..  Heck yeah!!!

I loved the idea of this movie and want to see more.  If the rift continues to be a problem and budgets aren't too much, I could see this being made into a TV series.

I give it an 8.5 out of 10 for its butt kicking monster bashing action.  The Jaegers were awesome.  Also, I took my kids to this movie.  Nine year olds, who like their dad, love big robots and hulking monsters on the big screen.  Gotta love it.