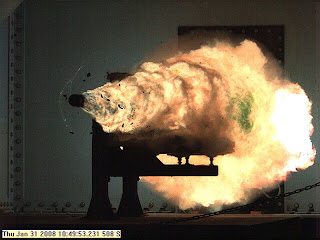 As I often plan to do with the this blog, I want to look at the more science related issues in science-fiction writing.  Why rail guns?  Well, the Epherium Chronicles is set in the mid 22nd century and the primary Earth space based weapons are rail guns.  My goal with series of posts is not only to educate other about rail guns (their origin and function), but to compare them to other weapons and explain some of the advances made to them for my sci-fi book series.  It's the whole world building thing.

Plus, the picture of the rail gun fired from a naval test platform is really cool and I had to share.

First of all, what is a rail gun.  Here is wikipedia's quick explanation:

A railgun is an electrically powered electromagnetic projectile launcher based on similar principles to the homopolar motor. A railgun comprises a pair of parallel conducting rails, along which a sliding armature is accelerated by the electromagnetic effects of a current that flows down one rail, into the armature and then back along the other rail.

Straightforward isn't it.  Well, a railgun originally was a very simple design based on the theory of the traditional electric motor.  You see for most of us engineering types, once the blood gets in the water on a new and cool topic, we are on it like sharks.  It wasn't different for the concept of electric motors.  Once the first few motor designs were developed a whole new engineering craze on the subject began.

Anyway, now for the motors.

You see, the traditional electric motors look something like this (for purposes of brevity, I using one example of a DC motor and not an AC one or the multitude of variations...its my blog and I show the examples). 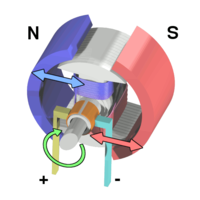 Since there are so many types, I don't want to bog you down with the details, but what I want to show is this.  When you apply electric current to the motor, the magnetic field generated create an electromotive force.  In the case of a standard motor the force causes the armature in the center to spin.  The higher the current, the faster it moves.

So if this a motor, what does a railgun have to do with it?  Well, a railgun is essential a linear motor, where the force generated moves in a straight line.  This next diagram depicts a simple concept of a railgun. 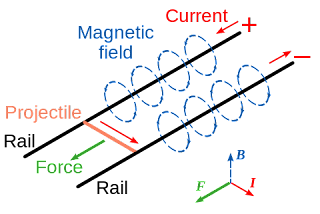 The railgun rails are parallel rails that electric current travels.  When current flows through a conductor like the rails, it generates a magnetic field.  In this case, the projectile is the armature and becomes a circuit bridge, thus allowing the electric current to run across from one of the rails to the other.  As the current travels, the magnetic fields create a linear electromotive force that pushes the project down the rails.  The higher the current, the create the acceleration.

In the next part of the series, we will talk history of the railgun, look at different approach to a linear motor weapon, and compare them to traditional types of weapons used today.  Nothing like examples to let your mind relate to scientific jargon.

Please feel free to comment and share you thoughts.  This is fun stuff and I love to talk about.  Later on in this series we will look at how these weapons have been used in Sci-fi books, movies, or TV.  Are there depictions accurate or too far fetched?
Posted by T.D. Wilson at 8:23 PM