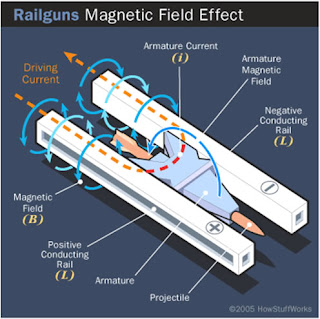 In my last installment of Railguns "The Series", I started off by describing what is a railgun and how it compares to the function of an electric motor.  This time, let's take a look at the history of the railgun and a little bit of why the railgun is considered to be a potential weapon for ships, portable field artillery, and even small arms.

Most historians view the first railgun design as the developed by French Inventor Louis Octave Fauchon-Villeplee.  It was an electric cannon,  He applied for a US Patent and it was issued in 1922.  The first working railgun was fielded by Joachim Hansler of Germany during World War II.  The design, while feasible, only accelerated projectiles to about 1 km/sec.  The velocity was slightly slower than conventional rounds, but the design was a fantastic achievement.  He planned to take the design to make a new anti-aircraft cannon.  That version of the cannon was never built, but plans that were later discovered showed the design to be technically feasible.  Although, the power required to achieve the muzzle velocity for the explosive laden projectile and the rate of fire would have required a small nuclear reactor.

Later in the 1960s, Australian physicists created a larger version of the railgun, but struggled with solid armature projectiles achieving greater than 3 km/sec velocities.  They added a new wrinkle to the design; plasma.  A small fuse was inserted behind a non-conductive projectile (usually a nylon cube).  The concept of the fuse is to become the initial circuit between the rails.  As the fuse is consumed by the current, it becomes super-heated plasma.  During the process, the electromotive force generated by the magnetic fields thrusts the projectile forward.

Over the past few decades, we have seen more advancements in railgun design.  In 2003, the British Ministry of Defense tested a 1/8 scale railgun design.  The muzzle velocity for that test reached Mach 6.  An impressive step for a the next larger scale weapon, primary for ships or large platforms.

In 2012, BAE delivered and tested a railgun for the US Navy.  The picture of the gun is below: 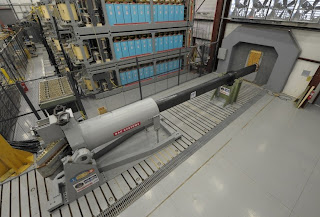 The tests for this gun provided speeds roughly at 4500 to 5600 mph and were set for ranges of 50 to 100 nautical miles.  Not bad at all.  Average effective range for most naval gun ordinance is about 12 miles, except the larger 16 in guns of the Iowa Class battleships that ranged about 18.

General Atomics has also developed a new railgun.  Here is a video of their offering called the Blitzer System whick was designed for the Navy.

Now there are still some issues that we continue to face.  Power is one of the most prevalent, but with a nuclear powered vessel, those can be minimized.  Rail wear and malformation are still an issue.  The friction and effect of the high current passing through the rails is significant and has been a issue from the earliest of designs.  Rate of fire will not be high due to the power required and wear on the rails.  Repulsion is a another issue to consider.  Whether the projectile is a solid armature or a plasma "hybrid", there is significant force pressing outward on the rails that can cause stress and warping.  In space, reaction force to the liner electromagnetic force must be dealt with.  Having a ship in the water or a platform on the ground makes is a lot easier.

Next time we will talk about the use of railguns in our favorite sci-fi books, tv shows, and movies.  Don't worry, my take on using railguns in space is coming soon.