I decided to wait to post this next segment in my series on Railguns, since what I want to talk about will have more relevance to the first two books of my sci-fi series, The Epherium Chronicles, that are about to be released.  In my previous posts, we looked at history of railguns, the science behind them, and how we have used different versions (railguns and coilguns) in science fiction books, movies, and even video games.

All of those posts have just primed you for this one.  Trust me.  Now, The Epherium Chronicles story is set in the mid 22nd century.  The primary weapon of choice for space combat and for some ground force units is a railgun.  Why a railgun and not a particle weapon or laser?  Good question.  I looked at all viable types and humans were still developing a particle weapon for a large military application and in my series, ended up reverse engineering an alien design.  For short range point defense weapons in space, pulse laser cannons were most effective, but had limited range.  The high energy laser cannons required even more energy than several railguns and was their effective range was much less than the railgun.  The railgun could produce devastating effects if properly maintained and was chosen as the primary weapon on all Earth Defense Force ships.

So what kind of design are we looking at?  Well, let me put my engineer hat back on for a second.  In one of my earlier posts on the science of railguns, I described a hybrid style railgun that uses electrically energized plasma to help catapult the projectile along with the magnetic fields of the rails.  Well, the design is very similar to this.  Take a look at the picture of a hybrid style railgun. 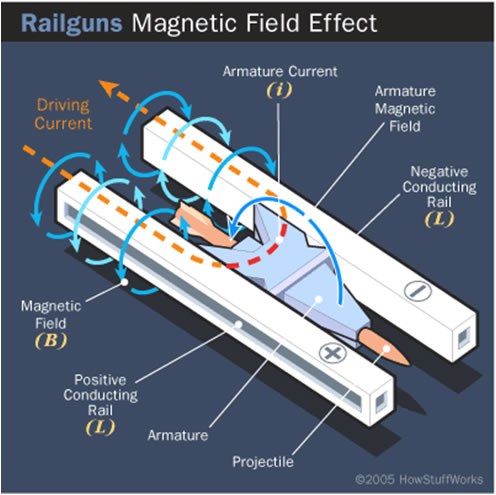 Of course, railguns generate a tremendous amount of recoil force and the rails have a danger of pushing out of alignment.  In the design I used for the EDF weapons, railgun are mounted on turrets capable of handling the recoil.  Also the rails are enclosed in a long tube of the neutronium alloy (incredibly strong and used for ship armor as well).  The tubes taper past the rails and provide a strong housing for the rails to prevent bowing and act as extended smooth bore for better accuracy past the rail exit point.  The interior of the tubes are lined with a near frictionless material that has to be replaced after 100 salvos or the cannon may overheat.  Speaking of heat, space is a great medium for heat transfer, but its not instantaneous for large generations of heat and buildups do occur.

Let's look at the projectiles.  The standard EDF projectile is solid and made for armor piercing.  Other rounds include high energy explosives encased in the projectile.  The launcher design helps to prevent any detonation, since the armature current flows through the carriage and not the projectile.  Lastly, I designed a flak round.  Yep, a space flak round for dealing with fighters and other small craft.  Once the projectile is launched, it is set to detonate at a predetermined time.  The explosion expels several hard metal chunks outward, but remember, momentum in space isn't hindered like in atmosphere.  So now I have hundreds or even thousands of small metal pieces speeding in the same direction as the projectile with little or no loss in velocity.  It can create a huge hole in a fighter formation.

So that's space, but what about on the ground?  The EDF Marines employ different types of weapons on the ground.  Conventional caseless ammo rifles, some small pulse rifles and other small arms, but there are two vehicle designs built with the railgun in mind.  First is the tank.  Much in the way the A-10 Warthog plane was built around a gun, the EDF Marine battle tank is the same design.  Tough armor surrounding a railgun.  The Marines do have a more conventional tank similar to ones we have today, but the railgun version is much more effective in little or no atmosphere.  The other is the Mongoose.  I created the Mongoose from a concept of this lunar rover.  Take a look. 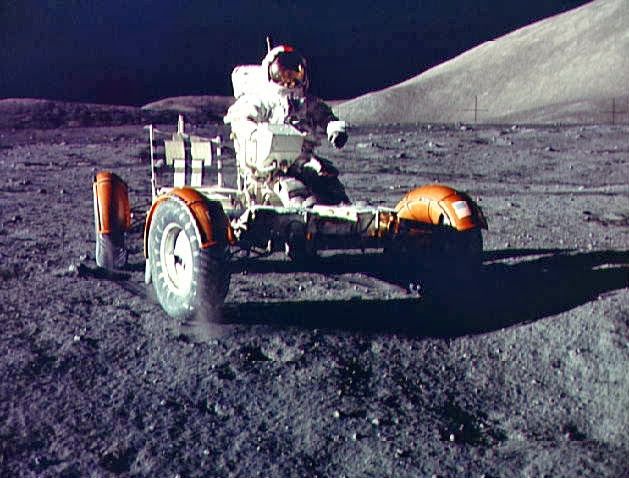 The Mongoose is a high speed wide wheel base rover, with an anti-tank railgun mounted in the center.  To power the weapon, it has a small enhanced nuclear power plant which charges the guns capacitor.  Unfortunately, the capacitor can only hold enough energy for two shots and takes about two minutes to fully recharge, but that is where the Mongoose's speed and maneuverability comes in handy.  The real science in the design is what I added over the wheels.  To keep the Mongoose upright after firing its railgun, especially in low gravity environments, it required stabilization thrusters to offset the force.  So when the cannon is fired, large blue flames from the thrusters can be seen over its wheels.

Well, that is all I have time for in this segment.  Stay tuned for more as I will talk about coilgun designs for engines.  Yes, you guessed it, ion drives.
Posted by T.D. Wilson at 8:53 PM