Godzilla: King of the Monsters! 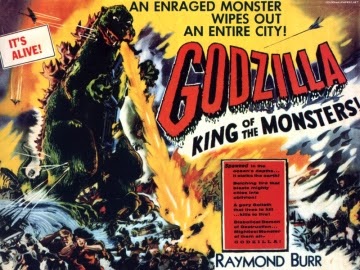 Now that I have a brief lull in what I've been working on, I need to catch up on my trivia posts.  This one comes from 1956 with the US release of Godzilla: King of the Monsters!  This film was a edited version of the original 1954 film released in Japan, which was the first kaiju or huge monster movie to be created.  Since I haven't made a trivia post in awhile, I'm going to ask three questions.  Post what know and share it with everyone.

Question #1  What island off Japan did Godzilla first appear?

Question #2  In the 1956 edited version, a US reported was added to the film covering the Godzilla sightings.  What was the name of the actor who played him?

Question #3  What was the weapon used to destroy Godzilla?

Take a crack at them and be sure to share them online and with your friends.
Posted by T.D. Wilson at 7:46 AM