There has been a lot of buzz in the astronomical community over the latest finding a potential exo-planet around Proxima Centauri in the habitable zone.  More details about this potential planet are to be released tomorrow, but why is it important? 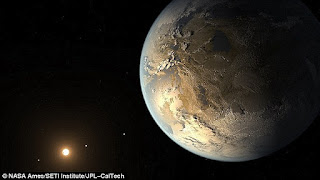 Proxima is the closest star outside our solar system.  Mars offers us our best shot at a world to one day colonize and terraform, but a world similar to our own in a very close system could provide us tremendous potential to create a viable colony.  All the other exo-planets we have found today that are in the habitable zones around their stars are hundreds of light years from here.

The biggest hurdle we would have it getting there.  Without faster than light travel, colony ships would take decades at least to reach the planet.  Even our own idea for a laser-guided miniature probe would need to be accelerated to sub light capable speeds to reach there before 2030.

What would find there?  Who knows?  New plant and animal life; possibly a new alien intelligent species.  I started writing sci-fi novels just for this kind of moment.  Space is exciting, holds great potential, but there are risks and dangers.  We may not reach this world in my lifetime, but I definitely want to see our people give it their best shot.
Posted by T.D. Wilson at 7:05 AM