The fall season of TV shows is nearly upon us, but there is one that starts a bit early.  No, it's not the return of Fear the Walking Dead.  It's The Strain. 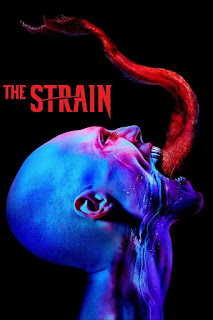 I'm not the big vampire type of show lover.  The more recent movies like Twilight and TV series like Vampire Diaries or True Blood, make it out to be this teen crush, lust filled or romantic endeavor.  No! Vampires are bad news.  I like the old school stuff.  Dracula, Fright Night, and Salem's Lot.  Vampirism isn't something that supposed to be desired, but rather feared and confronted.  A struggle for overwhelmed heroes or heroines, full of character flaws, doubts, a firm believe their very soul is on the line when confronting these creatures.

After the first two seasons and the constant prodding from my wife that I would actually like this show, I decided watch the first few episodes.  Now, after a few weeks of binge watching episodes, I am completely hooked and caught up.  I like the storyline and the threat this version of vampirism brings, but the characters are the real draw.

Professor Abraham Setrakian is a modern day Van Helsing who has fought these creatures when he first encountered The Master in a concentration camp in World War II.  The Master, though the larger antagonist, has several sinister agents working for him that take the forefront in the story.  The best of these is Thomas Eichhorst, the former Nazi commander of Setrakian's concentration camp and the good Professor's long time foe.  Dr. Ephraim Goodweather is the reluctant and almost fallen hero of the tale.  He is, or rather was, the leader of the CDC team investigating the outbreak that is now infesting New York and turning people into vampires to serve The Master.  He is definitely not the perfect hero and sometime you wonder when he will eventually get his act together.  With the onset of Season 3, it should be interesting to see.  One of my favorite characters is Vasilly Fet, a NYC exterminator, who has joined Goodweather and Setrakian in their effort to destroy The Master and his ilk.  He brings the right level of brash tactics and humor that emboldens the story.

There are more characters to talk about, but I'll let you check them out for yourselves.  Writers Guillermo del Toro and Chuck Hogan have created a gripping and fast paced series that will capture your thrill for a good crusade against the darkness which threatens NYC.  I can't wait for Season 3 to begin on August 28, 2016.  Be sure to check it out.
Posted by T.D. Wilson at 7:22 PM