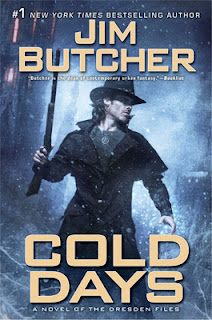 I have been a huge Harry Dresden fan from the very first book, Storm Front.  Jim Butcher has done a phenominal job with this series.

Cold Days is set just after the last installment Ghost Story, where Harry Dresden was believed to be dead.  For all intensive purposes, he was.  His spirit was running around trying to put together the pieces of who killed him.

Now, Harry has been brought back, thanks in part to some powerful help, aka Mab, The Fae Queen of Air and Darkness.  In order to save his daughter two before Harry's demise, he made an agreement to become the Winter Knight and serve Mab.  She certainly wouldn't let a small thing like death get in the way of Harry living up to his end of the bargain.


Now, I'm not going to offer spoilers here.  I just want to give you my thoughts and let you read and make up your own mind.  Cold Days was well crafted and as always.  Full of twists and turns, but there did seem to have the feeling that there was always something bigger and nastier that had to come his way.   I would have preferred more of older enemy that continues to be the protagonist here.  Of course there is Mab, many of the other Winter and Summer Courts to contend with...  Perhaps, I am just hankering for a early standoff with another member of the dubious and yet unmasked, Black Council.

This book focuses more on the Fae and his newly bonded island... yes, I said island... Demonreach.  Like Changes, much about Harry's life, his surroundings, and his future are being altered and as much as he fights with it, there seems to be little he can do to stop it.

Mr. Butcher grasp of Harry's demeanor and how he conveys his friend's views of him, now that he is the Winter Knight is superb.  The book did seem to stall for me just abit about 1/3 the way in.  Not sure if it was intended to put as the reader state of "Oh well", or not.  At one point, I could tell it seemed lost..  I counted "Hell's Bells!" three times on one page.

Overall, I think Cold Days was another fantastic Dresden Files novel, but it was not Mr. Butcher's best.  I give it 4.5 out of 5, but I am anxious to see what Harry will do next.