Use in Science Fiction 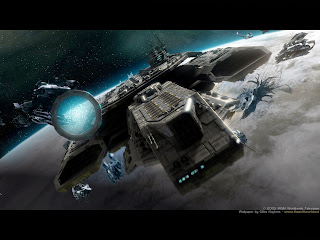 In my two previous posts on this topic, we looked at the concept and then the history of the railgun.  As you might have guessed, if these weapons were to fully fielded, their firepower could have a dramatic effect on the battlefields we know today.  However, we still struggle to overcome many of the limitations for power, physics, materials, and feasibility.  Given time, I believe we can find a way to bring these weapons out of concept phases and make them truly combat ready.

In this segment, I wanted to focus on where railguns have been used or discussed in science fiction books, TV, movies, and especially in role-playing and video games.  Now before I begin, I do want to note that not all the references listed here are true railgun implementations.  Many are based on the coilgun.  I plan to talk more about the coilgun features in another post, but for brevity, the coilgun uses magnetic fields from electrical wire coils to accelerate a projectile.  A projectile would be accelerated by the magnetic fields in the center of the coils.  An example of the coilgun would be a Gauss Rifle or a mass driver.

Now, where have we seen references to railguns or electric guns in literature?  One of the prominent novel series to showcase railguns was old favorite of mine, Buck Rogers.  Another example hails from 1955, when Arthur C. Clark used a weapon in his novel Earthlight that propelled a piece of molten metal for projectile.  In a railgun, this implementation wouldn't work, but it was one of the earliest references.  Perhaps the earliest example was in 1897, but it was for a coilgun.  John Munro's A Trip to Venus used a large electric gun to launch vehicles into space and later could be modified to send reinforced projectiles as a weapon.

I have found several references to mass drivers and Gauss Rifles in different books.  The Mechwarrior and Battletech books had Gauss Rifles on mechs, tanks, and spaceships (lots of these books were really good, but the ones written by Michael A. Stackpole were superb).  Henry Harrison's book The Stainless Steel Rat's Revenge was another that used Gauss Rifles.  For true railguns, Redemption Ark, by Alastair Reynolds and Old Man's War by John Scalzi were good examples of railguns deployed on spaceships.  There are several others, some of which had hand-held versions of railguns, but these are the ones I am most familiar.

So, what about TV series?  Well, the first one that came to mind for me was Stargate: Atlantis.  The use of the railguns was an excellent ideas and they could easily be powered by Asgardian power cores, but the implementation here to me was not realistic. The rate of fire was way to high.  The show seemed to treat the railgun more as point defense weapons and had no real damaging effect against other large ships, even those that didn't have shields.

In Babylon 5 (one of my all time favorite sci-fi series), the Centauri used mass drivers to pummel the Narn homeworld.  I tried to dig up some more Earth based uses for railguns or mass drivers for the show or the role-playing game, but I haven't found any.

Space Above and Beyond had mention that cannons were railguns, but the design use doesn't fit either.  There were some big cannons on the carriers, but we never got to see if these were railguns or some sort of particle weapon.

There is still some debate about the type of weapons used by the Battlestars in the latest rendition of Battlestar Galactica.  Some believe the main weapons, particularly on the newer Pegasus were railguns.  The design of the weapons for the Galactica still look to be a conventional weapon design.  They could work in space, but the round or firing chamber would have to have some oxygen available.

Now there are some really cool anime series that used railguns; specifically, Macross (Robotech).  The SDF-1 was equipped with four huge railguns, as were the Mach II Destroids (my friend Jeff is a huge fan of those).  The Justice League cartoon series had a reference to mass drivers via the perennial villain Vandal Savage.

There may be some more TV references that I am not aware, so please post comments for those you know.

Now on to the big screen.  There are a few big films that showcased some type of electromagnetic projectile weapon.  The Last Starfighter (a movie that I really wanted a sequel made) contained the meteor gun, which was a large mass driver used by the Kodan to attack the Starfighter base.  The movie, Eraser, which starred Arnold Schwarzenegger, used a  hand-held railgun weapon that was complete with x-ray optics.  Demolition Man was another to depict the railgun as a hand-held weapon.

In Aliens, the Marine warship, Sulaco, had several large gun emplacements.  In many discussions and data provided about the ship, it was stated that some of the guns were railguns, but we never got to see them in action.  Hmm, nuke it from orbit or lob a few sorties down to the planet and let the aliens suck on those.  Tough call.

More recently, Transformers: Revenge of the Fallen used a navy ship based railgun to destroy Devastator when he was tearing apart a pyramid.  This was probably the most realistic example of a railgun in the field of any of the movies or TV shows I have seen, but it was only used once.  In this case, once was enough and you could see the amount of damage it inflicted even at long range.

The Zeus System in G.I. Joe: Retaliation was an example of a mass driver.  However, the system relied more on gravity to accelerate its projectiles.  Speed kills and this implementation used it to devastating effect.

I believe the newest railgun implementation in a movie was in Elysium with its ChemRail gun.

Finally, lets look at games.  Remarkably, I have found the most references to the use of railguns and coilguns in different fashions in role-playing or video games.  Lets start with role-playing/table-top games.  I was always a big BattleTech fan and Gauss Rifles were a great weapon for damage and range.  I played Traveler a few times, but I never realized there were Gauss style weapons.  Another iconic game, WarHammer 40000 has its Tau railguns.  The game used railguns for tanks, aircraft and powered armor.  Another game I loved playing was Palladium's Rifts.   There was so much source material to use.  Lots of powered armor and big weapons, especially the GlitterBoy armor.  The armor had good protection and one big railgun.

As you can imagine, video games have so many implementations for railguns.  Command and Conquer, Armored Core, Metal Gear solid, some of the Ace Combat series games, Descent 3, Total Annihilation (I loved that game), Star Craft, Tachyon: The Fringe (ok game, but it had Bruce Campbell in it so it had to be good, right?), several Quake games, and the Master of Orion game series.  You can find them all over the Halo game universe, they are in Half-life, and most importantly, they were used in the Mass Effect games.  Commander John Shepard for the win!  Who's with me?

This list is only a fraction of the games I found references for railguns, but these are the ones I have played.  Kinda wonder how much free time I really had over the years, huh?  I must say that I budgeted it well.

That's it for this installment.  In my next post, I will explain my vision for the use of railguns in the future and how I have employed them in my sci-fi book series, The Epherium Chronicles.  As always, if you have more information on railguns and their use in sci-fi for books, TV, movies, or games, please post it and share.