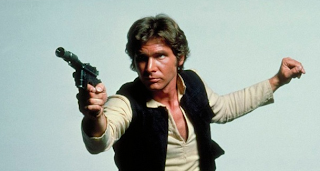 In the first Star Wars film (Episode IV: A New Hope), Luke, Han, Chewie and Leia are sneaking around the Death Star after their escape from the trash compactor.  The group encounters a patrol of Stormtroopers.  Han and Chewie tell Luke and Leia to "Get back to the ship!" and take off after the retreating troopers.  Their advance stops when Han comes to a room filled with more Stormtroopers, who immediately open fire and force Han and Chewie to run.  That scene in the "Special Edition" version of A New Hope was changed and had several squads of troopers in the room.  What was the count of Stormtroopers in the room in the original unmodified release?

Here is a link to a video clip showing the Special Edition version: