One of the fun differences for the new Captain America 2: The Winter Soldier movie and its global release, will be the use of a different "catch-up" list for Captain America.  Here is Steve Roger's list in the US version: 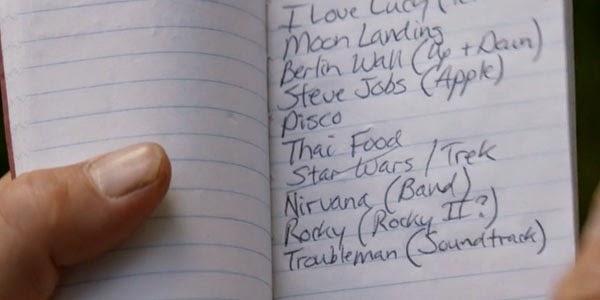 You can see the I Love Lucy TV show, Rocky, Star Wars crossed out (perhaps seen), Star Trek, and even disco.  He's a little late to meet Steve Jobs, but somebody please get him an iPad.

Look at the UK version:

It has the TV show Sherlock from the BBC, The Beatles, the World Cup finals, and you can see that Star Wars isn't crossed out yet.

Australian fans get AC/DC, Skippy the Bush Kangaroo, and Steve Irwin.  The French will see the 1998 World Cup, and The Fifth Element.  Korean fans get Ji Sung Park, Oldboy, and Dance Dance Revolution.
It's kind of exciting to see  Marvel and movie producers put different twists on the story that strike home with fans from different regions around the world.  Kind of makes Steve Rogers, Captain America, seem to be a true hero the world can relate to.
Posted by T.D. Wilson at 12:41 PM