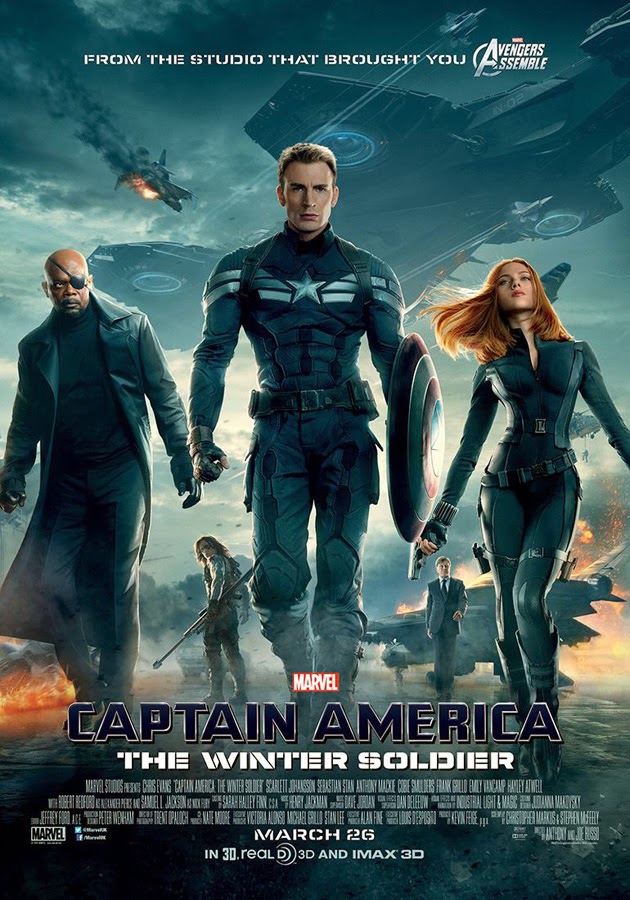 Despite my normal wait until the second weekend to see a highly anticipated film, I braved the crowds and took my family to watch Captain America: The Winter Soldier.  Now I don't want to give too many spoilers and I'm sure many of you have already read about most of the important points of the movie, but I have to say one word.  "Wow!"  Yep, that about sums of this film.  It was incredible and yes, there was some good acting there too...:)

Besides the action and the mystery behind who is The Winter Soldier, the real meat of the story focuses on Steve Roger's adjustment to living in the 21st century.  From his catch up list to his simple down-to-earth approach to solving problems made this story really appealing to me.  I also loved the banter between him and Black Widow.  Dating still seems to be a hardship.

But it is his 1940's mindset that makes Steve Rogers so special, especially with dealing with the problems surrounding S.H.I.E.L.D.  It takes a man out of his element and out of time to see what's really going on, to recognize danger for what it is.  Even Nick Fury didn't see it and almost didn't realize the full extent until Steve calls him on it.

Now, the movie is loaded with action and Captain America's interaction with The Winter Soldier is awesome.  The ending was great, but what I expected and it left good lead-ins to Avengers 2 and the third Captain America movie.  Yes, there is a Captain America 3 coming.  It's slated for May 6, 2016.  As always with the new Marvel movies, stay for the credits.  If you don't understand what you're seeing, leave a comment on this post and I can fill you in.

The other important tie-in from this movie is what will happen with Marvel's Agents of S.H.I.E.L.D.  The Uprising them includes the current threads around Deadlok, Centipede, and the Clairvoyant.  All of these look to be directly related to what Captain America discovers with S.H.I.E.L.D. and explains why Colonel Fury was off the grid for a few weeks.  The next few episodes will be very interesting indeed.
Posted by T.D. Wilson at 7:32 PM