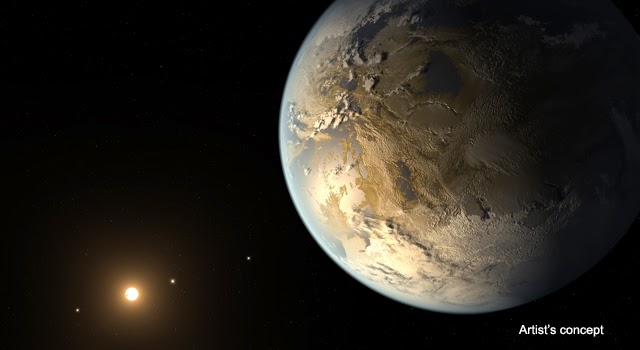 NASA announced today that its Kepler Space Telescope has discovered an Earth-size planet in a habitable zone around a distant star.  The newly discovered planet, Kepler-186f is about 500 light-years from Earth in the constellation Cygnus. From a habitable sense, the planet is right in the sweet spot for life as we understand it.  The orbit of Kepler-186f is about 130 days compared to our 365, but its star is a red dwarf and about half the size and mass of our sun.  In the habitable zone, there is a strong potential to find water in a liquid form and not ice or evaporating is gas once its expelled from under ground.

Now, the size of Kepler-186f is also very important.  This planet is approximately 10% bigger than the Earth.  That means two things.  First, a mild difference in gravity for humans (if we ever reach it) and second, there's a better chance of this planet being a rock like planet and not a gaseous one.

We are still a long way away from observing this planet better. even with our newly planned space telescopes, but finding a planet that meets these two important criteria is something to celebrate!  We could be looking at our first real opportunity to encounter life on a distant world and not just microbes.  Scientists and science fiction fans are already excited and like me, cannot wait to see what we're going to uncover next.

For more information on this discovery, check out the post on NASA's website.  NASA Discovery of Earth-like World.
Posted by T.D. Wilson at 8:24 PM